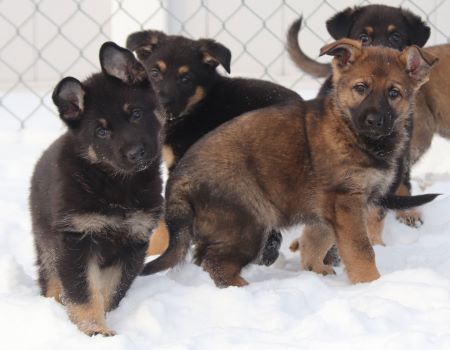 Click to view larger image: A group of black and brown German Shepherd puppies play in the snow inside a fenced area.

Until March 18, youngsters age four to 14 are encouraged to enter the RCMP’s ‘2021 Name the Puppy Contest’ to help find names for 13 new German Shepherd puppies – any one of which could end up in Kamloops some day.

It takes a really special dog to get through our program, said Corporal Steve Prior, a Kamloops RCMP dog handler.

Cpl. Prior has been paired with ‘Fargo’ for more than five years now and knows the difference police dogs make in the community and on the force. From helping to locate missing people, to tracking evidence and criminals -- sometimes in extremely dangerous environments -- they work hard to help keep people safe.

They do a lot for us without asking for much of anything, he added.
Cpl. Prior’s first working dog was named ‘Palmer’, which starts with the same letter as this year’s contest names, ‘P’.

Children are encouraged to be original and imaginative in finding names, but also reminded to pick names suitable for working police dogs.

Along with Fargo and Palmer, Cpl. Prior has also worked with police dogs Reiko and Faro.

Winning names will be chosen by the Police Dog Service Training Centre staff in Innisfail Alberta. A draw will determine the winning entry in the event of multiple submissions of the same puppy name.
In 2019, a student from Rayleigh was one of 13 winners, after his suggested name of ‘Marlow’ was chosen. The 13 children whose names are selected will each receive a laminated 8×10-inch photo of the pup they name, a plush dog named Justice, and an RCMP water bottle.

Names not selected for the contest will be considered for other puppies born during the year. 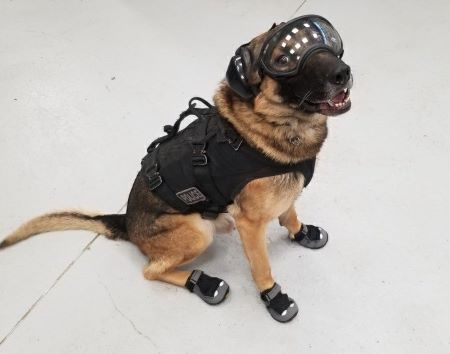 Click to view larger image: Kamloops Police Service Dog, Fargo, is a golden brown and black German Shepherd. He is wearing special goggles, black ear protection, a black vest, and black and grey boots, while sitting on a white floor.

To enter the contest, visit: https://www.rcmp-grc.gc.ca/en/depot/name-the-puppy-contest