Shortly after 1:00 a.m. on Wednesday, October 26, 2022, Prince George RCMP Frontline Police Officers were conducting patrols on the 7600-block of Gladstone Drive when they observed a vehicle leaving a residence known to police for having ties to the illicit drug trade. When the suspect vehicle became aware of police presence, it began to accelerate away and did not stop when police activated their emergency lights and sirens. The police officer stopped their car and did not continue to follow the suspect vehicle as it drove away. 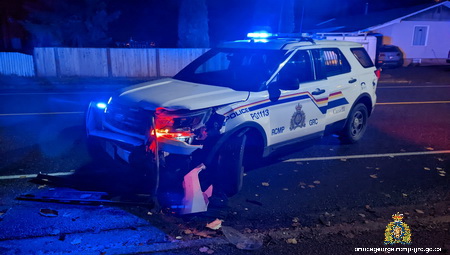 When the driver of the suspect vehicle saw more police officers attending the area, they turned around in a nearby cul-de-sac and headed back in the direction of the stopped police car. The suspect vehicle continued to accelerate and rammed into the stopped police car, causing the air bags to deploy and rendering it inoperable. The driver then swerved onto the sidewalk and fled the area, states Cpl. Jennifer Cooper, Media Relations Officer for the Prince George RCMP.

Police officers flooded the neighbourhood and began making patrols for the suspect vehicle, which was located on the 7200-block of St. Lawrence Place with the occupants having fled. A Police Service Dog team attended to help locate the suspects, who were found hiding on the 7500-block of Julliard Place, in a travel trailer that they had broken into to hide from police.

The suspects were arrested without further incident and will remain in police custody until they can attend court. Both suspects are well known to police.

Thankfully, the police officer involved in the crash did not suffer serious injury.

This is the second time in less than a week that people associated to this residence have been involved in outright acts of violence against police. While certain aspects of the justice system, such as the detention of offenders and sentencing, are beyond the control of police we will continue to identify and arrest those involved in the illicit drug trade and other criminal activity, doing our part to stop those who demonstrate a wanton disregard for the safety of the public and our officers, states Superintendent Shaun Wright, Officer in Charge of the Prince George RCMP.