Police are requesting that anyone who witnessed a motor vehicle incident which occurred on Foothills Boulevard near Ochakwin Crescent on February 19, 2021 to come forward.

Just before 9:00 p.m. on February 19, 2021, a member of the Prince George RCMP’s Traffic Services Unit was patrolling Northbound on Foothills Boulevard when he came across several vehicles with their hazard lights on.

The member then observed a grey Ford F-150 was sitting in the raised centre median, facing southbound. The member noted the extensive front-end damage to the truck and a sheared off power pole, as well. 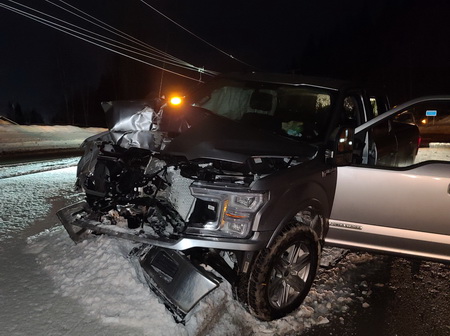 Photo of vehicle stuck up on meridian

The Prince George RCMP Traffic Services Unit is investigating the role alcohol or drug impairment may have played in the incident, and are asking any witnesses or other drivers to come forward and speak with police.

Due to the danger posed by the downed Hydro pole, witnesses were quickly cleared from the scene by emergency services personnel. To gain more perspective on this event, police would like to speak with anyone who saw the incident or the driving behaviour of the vehicle in the minutes preceding the incident and ask they call the non-emergency line at 250-561-3300 to speak with an officer, states Cst. Jennifer Cooper, media spokesperson for the Prince George RCMP.

This investigation is ongoing.