Driver charged with Dangerous Operation of a Motor Vehicle

On December 18, 2020, Brandon James Peters pleaded guilty to Dangerous Operation of a Motor Vehicle. He was given a Conditional Sentence of 6 months with 18 months’ probation, a victim surcharge of $200 and is prohibited from driving for one year.

This is in relation to a June 30, 2020 file where the Prince George RCMP responded to multiple 9-1-1 calls reporting a two vehicle collision and disturbance on Highway 97 at Houghtaling Road in Prince George. Witnesses reported that a car had t-boned a full size pick-up and continued to push the truck across three lanes of highway and over the curb, leading to a physical fight between drivers. 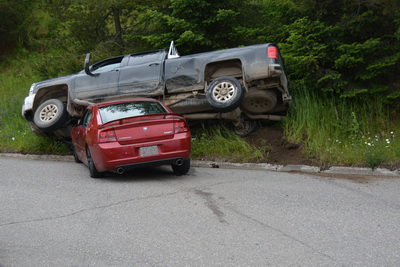 Police were in the area and attended the scene immediately; they determined the incident was the result of a dispute between persons known to each other. Evidence and witness accounts indicated that the driver of the smaller car had deliberately crashed into the pick-up and pushed it off the highway and onto a curb. The truck was occupied by an adult male driver and an adult female passenger. A number of vehicles traveling on the highway at the time had to abruptly brake to avoid being a part of the incident.

The drivers were not injured, however, the female passenger received minor injuries. Drugs, including alcohol, were not believed to have been a factor in this incident. Traffic was effected at the time for a number of hours as investigators gathered evidence and cleared the scene.