BC RCMP Major Crime has now positively identified both individuals, found deceased near Naramata last week, as two men from the BC Southern Interior and deem their deaths as homicides.

29-year-old Erick Fryer and 31-year-old Carlos Fryer, each of Kamloops BC, have been positively identified by BC RCMP Major Crime investigators as the two men found deceased in a remote location near Naramata on May 10, 2021. Police are releasing the names of both decedents in an effort to further the still ongoing investigation.

The BC Coroners Service is also investigating to determine how, where, when and by what means the deaths occurred. 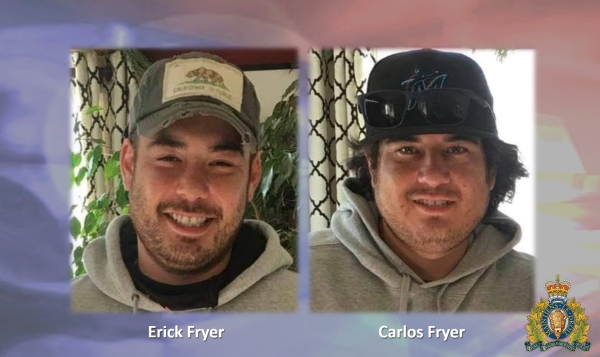 The unexpected deaths of both Erick and Carlos are being investigated by police as homicides, says Acting Officer-In-Charge (A/OIC) Supt. Sanjaya Wijayakoon of the BC RCMP Major Crime Section. South Okanagan residents can expect to continue to see major crime resources in the region for the remainder of the week as investigators continue to advance the homicide investigation.

BC RCMP remains committed to determining what led to Erick and Carlos’ deaths, identifying the person or persons responsible for their killing and keeping the victim’s family updated on the investigation as it continues to unfold, adds Supt. Sanjaya Wijayakoon.

Investigators still believe that this incident was isolated in nature and not a random act. Police have not uncovered anything to suggest these homicides are connected to the BC Lower Mainland gang conflict. Major crime investigators remain open to all possibilities in this homicide case, and renew their call for anyone with any information to come forward immediately.

Anyone with any additional information is asked to contact the BC RCMP Major Crime information line at 1-877-987-8477.