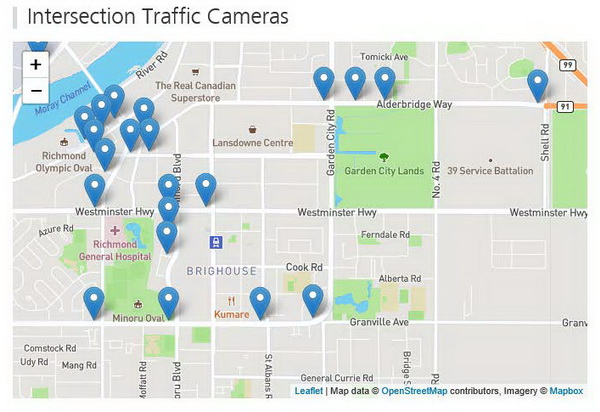 [see map and list of current locations for video cameras]

Richmond RCMP now has access to video cameras at traffic intersections throughout the city.

For several months now, the City of Richmond has been installing intersection video cameras at 110 major traffic intersections across the city. Beginning April 28th, these cameras started recording.

Officer-in-charge of the Richmond RCMP, Chief Superintendent Will Ng said, This is an important advancement for public safety in our community, especially when it comes to road safety. While they can offer evidence in a variety of investigations, video cameras are particularly useful in traffic collision investigations, which often rely heavily on witness statements and photographs taken after the fact.

The City of Richmond advises that it has been working closely with the Provincial Office of the Information and Privacy Commissioner (OIPC) to ensure the City is compliant with privacy regulations.
Under strict legal guidelines, Richmond RCMP investigators will be able to apply for video evidence captured by the cameras within 20 days of the recording.

Being able to access video evidence will significantly improve the quality of police investigations, said Chief Supt. Ng. We are also hoping that public knowledge of Richmond’s extensive intersection video camera system will encourage better driving habits in our community, he added.