Richmond, This Is Who We Are 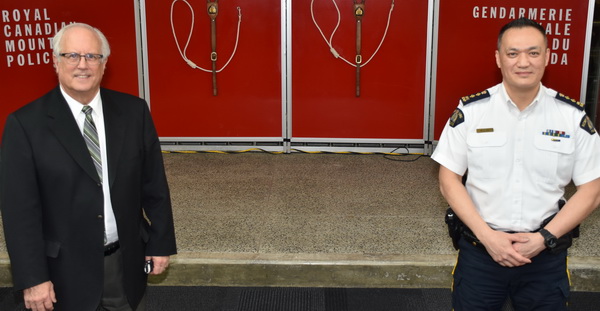 Richmond RCMP members, municipal employees and volunteers are pleased to announce the promotion of their Detachment Commander Superintendent Will Ng to the rank of Chief Superintendent.

Lower Mainland District Operations Officer Chief Superintendent Maureen Levy announced the appointment via video conference in mid-February. "I have had the pleasure to work alongside C/Supt. Will Ng since November of 2019, said C/Supt. Levy. He is the consummate professional who is an extremely dedicated, humble and exemplary member of the RCMP. His unwavering commitment to his team, community and external stakeholders is truly noteworthy. He leads with grace, distinction and has a genuine respect for all and we are truly fortunate to have him lead the Richmond RCMP Detachment.

His recent promotion to the rank of Chief Superintendent is a true testament of his ongoing dedication, policing acumen, and leadership skills and I am very proud of Will for having reached such a pinnacle in his career. Well done Will and I could not be more proud of you or your accomplishments," said C/Supt. Levy.

City of Richmond Mayor Malcolm Brodie also participated in the announcement. Richmond has experienced significant growth in recent years and Officer-In-Charge Will Ng has played an important role in ensuring our RCMP Detachment has a strong presence in the community, said Mayor Brodie. Under his leadership, the Richmond RCMP has created new engagement opportunities with residents, spearheaded programs to build inclusiveness, and established important programs such as FOX-80. We congratulate him on his appointment as Chief Superintendent and look forward to his leadership in making Richmond a safe and resilient community, said Mayor Brodie.

C/Supt. Ng began his RCMP career at Surrey Detachment in 1995, where he first worked in Whalley as a General Duty member. From there, C/Supt. Ng moved on to work on a number of specialized teams including: Drugs Section, Serious Crime, Major Crime, and the Emergency Response Team (ERT). He also worked on the Integrated Homicide Investigation Team (IHIT) and as part of the Combined Forces Special Enforcement Unit (CFSEU). His wealth of Serious and Major Crime experience serves him well as an accredited Team Commander.

C/Supt. Ng has received both a Commanding Officer and Commissioner Commendation, and been awarded the British Columbia Medal of Valor, the Canadian Meritorious Service Medal and the Queen’s Diamond Jubilee Medal.

C/Supt. Ng arrived in Richmond as Officer-in-Charge in the spring of 2017. Upon his arrival, he immediately began seeking out opportunities to enhance the Detachment’s service delivery and improve our workplace culture. Many of the initiatives implemented under his leadership, have improved public safety, employee wellness, accountability mechanisms, and community outreach and engagement.

Anyone who knows him soon learns that C/Supt. Ng cares deeply for his team of RCMP members, municipal employees and volunteers, and works tirelessly to ensure they receive the support needed to deliver the highest level of police services to the citizens of Richmond.

Congratulations Chief Superintendent Ng!
We look forward to your continued leadership in our service to the people of Richmond.