On January 18, 2023, at just before 10:00am, the Fort St John RCMP received a report of a commercial break and enter at Mighty Peace Brewing located in the area of 102nd Street and 95th Avenue in Fort St John.

Police attended and learned suspects had made entry into the building by smashing the front door.

After reviewing surveillance video it is believed this event occurred overnight, at approximately 12:30am. 4 suspects, believed to be youth, entered the building, made their way behind the bar and stole approximately a dozen bottles of hard liquor, quickly grabbing them and stashing them in backpacks prior to exiting the building. 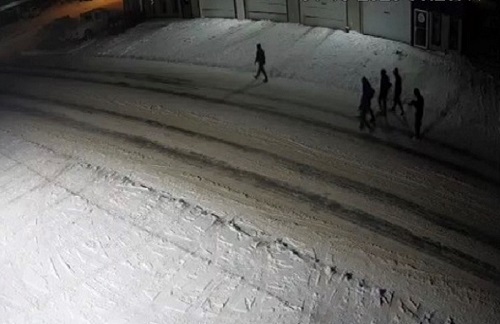 It is unknown if the fifth person in the photo was an additional suspect or was a passerby, said Constable Chad Neustaeter, Media Relations Officer for the Fort St John RCMP. Likely someone knows what these youth have done and is aware that they have come into a large quantity of liquor or may have heard them brag about what they did and how they obtained it.

The Fort St John RCMP continue to investigate and are asking anyone who has information in this matter to contact the Fort St John RCMP at 250-787-8100. Should you wish to remain anonymous, please call Crime Stoppers at 1-800-222-TIPS (8477) or submit a tip online at www.northernbccrimestoppers.ca.