On Friday afternoon David Jones, the Supervisor at Kelowna RCMP Detachment Cellblock was recognized with the Commissionaires Distinguished Service Medal (CDSM) for his dedicated and exemplary service.

The CDSM is a national recognition which was awarded to David by Chris Mitchell, the Commissionaire BC CEO. He flew into Kelowna for this special presentation to personally award the Medal to David in person showing the level of respect and appreciation.

David works within the Kelowna Regional Detachment and has since 2011. He was nominated to receive this CDSM by Mr. Mitchell on a recommendation from the Commissionaires BC honours committee.

David is an incredible member of our team, says Superintendent Kara Triance. The Medal is more than deserving as each and every day David goes above and beyond. The work that David and his team do within the Kelowna Regional Detachment is extremely important and I’m very happy that he has been recognized with this national honour.

The CDSM has been awarded to deserving individuals since 1989 but less then 30 have been granted. In order to be eligible to receive this honour an individual must meet several qualifications as it is designed to recognize distinguished service above and beyond the faithful performance of duty. The recipient must be nominated by the relevant Commissionaires Division or initiated by the National Honours and Awards Committee.

I was immensely proud of the formal recognition David received on Friday, said Torry White, Police Services Branch Manager. I’m glad that his CEO was on the ground to witness David’s hard work, professionalism and expertise. His noted work, and the work of all Commissionaires, is vital to ensuring our police services objectives can be accomplished as part of a collective Regional Kelowna Detachment Team.

(David is in the middle) 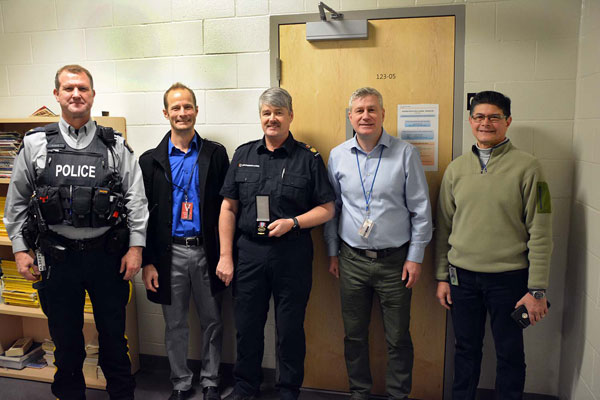