Revelstoke, This Is What We Do

Like many kids, Emmett viewed Labour Day Weekend as the shift from summer holidays to school days. Cpl. James Moore, asked his son what he wanted to do to celebrate the last day of summer. Emmett suggested that they go fishing in Griffin Lake, a place where they had canoed in the past. Griffin Lake is 27 km west of Revelstoke adjacent to the Trans-Canada Highway.

They packed up the canoe and fishing gear and headed for the lake. Being glacier fed, Lake Griffin is a crystal clear emerald jewel, and it’s intensely cold. The weather that day was sunny and warm and the water was flat and calm. By mid-afternoon, there was only one other boat on the lake; another canoe with two men that paddled past them heading to the centre of the lake. 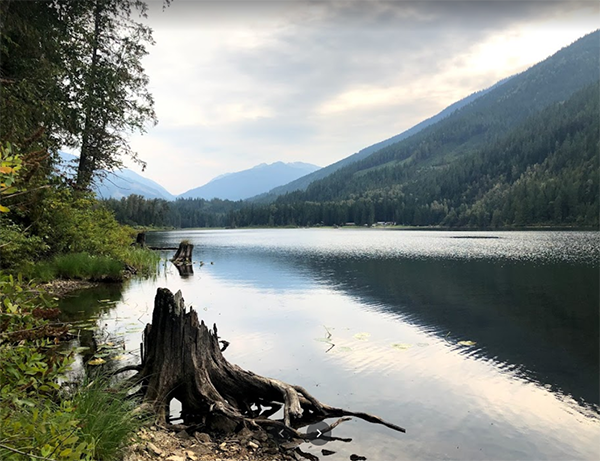 Sometime later, James heard something, looked up, and saw the other canoe flip right up into the air, then splash down with a mighty crash. He heard the men’s calls for help. Then the motion stopped.

As a first responder, there was no question that he would respond to their call for help. Emmett had been trained by his parents in self rescue and knew what they had to do.

The lake is multiple football fields long and James and Emmett need to paddle hard and fast to reach the two men. One man was in the water and clinging to the capsized canoe and the other had partially lifted himself onto the stern. Neither man had a lifejacket on. James asked them if they could swim and neither could.

When the canoe flipped, all the contents scattered across the lake, so James and Emmett paddled to retrieve the life jackets. When someone is submerged in the water, it is near impossible to get a life jacket on the person as the jacket keeps floating to the surface. Emmett managed to get at least an arm through the jacket on both men. It was clear that the men were exhausted and cold.

I was concerned that the men would get hypothermia, said James, a 12-year member of the RCMP Integrated Forensic Identification Services for the Southeast District. Despite their dark complexions, you could see that they were turning a pale grey. I am certain that it was partially due to shock and partially due to decreased body temperature.

At this point, James had a decision to make. He could jump into the cold water, flip up their canoe and try to get the men into their vessel. But if something were to have happened to James that would have left his 11-year old son alone in their canoe.

He decided to tow the flipped and partially submerged canoe to the closest point on the shore. He unhooked his bullet bag that was clipped to his life jacket to retrieve 40 feet of rope and explained to Emmett what he needed him to do.

Emmett leaned over the bow and told each of the men to grab onto the rope. Then Emmett clipped the rope to their canoe. However, there was no place to clip the rope onto on James’ smaller canoe, so Emmett wrapped the rope around his wrists and braced himself against the side of his canoe locking his legs straight against frame. Emmett had to make sure that the rope out of James’s way as he paddled to shore.

It was easily 400-500 meters and it would take at least 20 minutes to get to shore. Thankfully, James had a kayak paddle that day which made it far easier for him to plunge the alternate blades into the water to propel the two canoes.

As Emmett was working to secure their canoe, James was continually getting both of these men to talk to him and to keep them busy with small tasks so they would move into a survival mentality and to get them involved in their own rescue.

They reached an area of exposed rock cliff. Emmett jumped out and pulled the men by hand the rest of the way to shore. Both men crawled out of the water and collapsed on the jagged rock.
Neither man had shoes. They must be among the contents of the men’s canoe that were now strewn across the lake. James headed back to the centre of the lake to retrieve the shoes, the men’s paddles and brought them back.

Earlier, Emmett had pulled their canoe out of the water and flipped it over to drain. He helped the men properly fastened their lifejackets. When James returned, the men put on their shoes and climbed into their canoe. James and Emmett towed them along the shoreline until they reached the dock of the resort where they were staying. The men’s wives and the manager were standing on the dock watching the rescue.

It would not have been the first recovery James had participated in on Griffin Lake. Being in forensics, he attends most calls of the nature through out the south east and across the province.
Emmett understood the gravity of the situation, says James about his son. Just think about it. You can’t swim; you don’t have a life jacket; and you’re clinging to a capsized canoe on a really cold lake. Emmett really stepped up and helped me that day.

It’s one thing to be an adult who is a first responder to do that, adds James. It’s quite another thing to have your 11 year-old son with you.

Emmett was definitely aware of how important it was that he and his Dad were on the lake at that time, and responded to the men’s call for help! 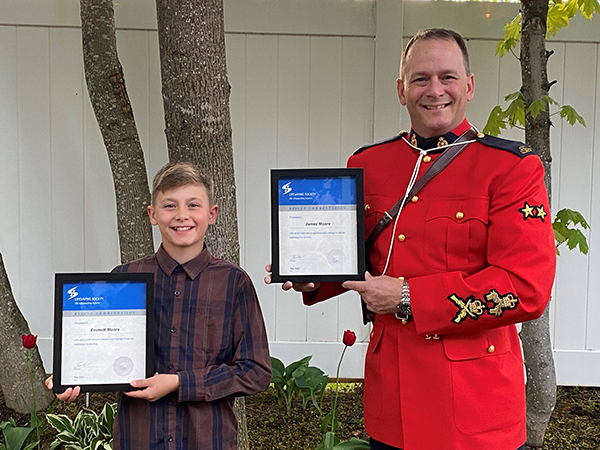 On May 28, 2022, the Lifesaving Society awarded both James and Emmett the Silver Medal of Merit that acknowledges meritorious service in saving a life during a water rescue. The Lifesaving Society is a not-for-profit organization committed to the prevention of drowning and aquatic-related injury through water safety education.