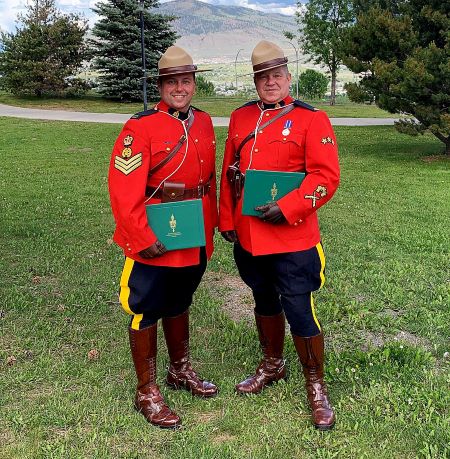 For their dedication to public service, two Kamloops RCMP officers were formally recognized recently as part of the Queen’s Platinum Jubilee Celebration.

On June 12, 2022, Sergeant Brandon Buliziuk and Corporal John Edinger were invited to a special celebration at the Thompson Rivers University in which Member of Parliament Frank Caputo presented them each with a Queen’s Platinum Jubilee certificate and pin.

Those who received an award were recognized by their peers for their display of public service, dedication, and volunteerism. Submissions were received from across the riding and reviewed by a non-partisan panel that selected the recipient.

It was a great honour to be recognized along side such an amazing group of people, said Sgt. Buliziuk. I am truly blessed and grateful that I was considered for this recognition.

Sgt. Buliziuk was recognized for his leadership in command roles related to numerous wildfires, floods and high-risk police incidents over the past several years. This included the rescue of an abducted 24-hour-old infant from a hospital and the coinciding high-risk arrest of the suspects.

In policing, our greatest successes result from our team efforts, he said. I’m beyond thankful for this award, but without the endless hard work of my team, the success of theses operations would never have been realized.

Sgt. Buliziuk’s efforts and dedication in supporting his communities, specifically in fundraising for causes that included BC Children’s Hospital and BC Special Olympics, were also noted.

Cpl. Edinger was recognized for his 23 years of commitment and dedication to frontline policing and for his outstanding leadership abilities.

Cpl. Edinger’s leadership during the 2021 Juniper Ridge Wildfire was instrumental, as was his leadership during several high profile police incidents over the past years, stated his nomination.
Those events included the rescue of the abducted infant and the coinciding high-risk arrest of the suspects, which Sgt. Buliziuk was also recognized for.

The Queen’s Platinum Jubilee Awards were presented in honour of the Queen’s 70th year.