May 21st-27th has been declared National Safe Boating Awareness Week in Canada.

One of the number of things that boaters need to be mindful of is to ensure they and anyone on their vessel wear a proper life jacket or personal floatation device (PFD). Over 80% of Canadians who drown while boating were not wearing their lifejacket or not wearing it properly.

If you happen to find yourself without PFD, the Alert Bay RCMP has found a way to ensure you stay safe while out boating.

Constable Scott MacDonald of the Alert Bay RCMP had the idea to create loaner PFD stations, I had seen them in other municipalities and contacted the Royal Canadian Marine Search and Rescue (RCM-SAR) out of Sidney about their Kids Don’t Float program. 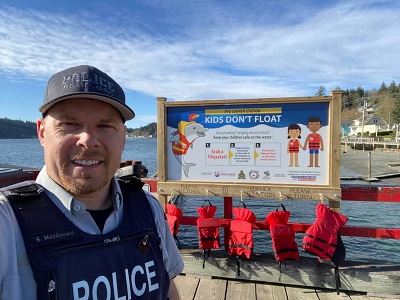 A loaner PFD station is a place on a dock where anyone can borrow a lifejacket should they not be equipped and need one.

According to Cst. MacDonald the idea is to borrow a PFD and once done using it, put it back so the next person can enjoy their outing. I was interested in the specifics of the program because Alert Bay is a coastal community where many people have boats.

With the backing of Indigenous Police Services (IPS), Cst. MacDonald secured the funding necessary for three loaner stations - one at each dock in Alert Bay - as it specifically targets child safety in the small community. All the PFDs were all generously donated to the program by Playsafe Productions.

Cst. MacDonald then contacted the Namgis Band and the Village of Alert Bay and obtained approval and support to build each station. The initiative is an important one in fostering safer and healthier Indigenous communities.

As the weather warms up, all three PFD loaner stations should ready for swimmers and boaters to enjoy the summer safely.