Three exceptional BC RCMP Federal Policing criminal analysts have been recognized for their dedication to serving and protecting Canadians from some of the most serious criminal threats facing our nation.

Although many of us may be familiar with criminal or intelligence analysts portrayed in popular media such as the highflying and adventurous CIA analyst Carrie Mathison, the main character in the famous thriller series Homeland, or the famed group of CIA analysts who were key to ultimately locating the infamous al Qaeda leader, Osama bin Laden. However, not many of us have crossed paths with, or personally know a real life analyst. This is partly due to the fact that criminal intelligence analysts often work behind the scenes, surrounded by multiple computer screens and databases while puzzling the informational pieces together in order to discover new details, criminal trends, and clues not immediately evident to investigators.

Analysts are trained and highly skilled in conducting research, collating information, evaluating details, and analyzing information from a variety of sources in order to produce intelligence products that assist in solving complex investigations, and help guide strategic and tactical decisions by law enforcement agencies and various levels of government.

With the BC RCMP Federal Policing’s own pool of dedicated and talented team of analysts, Paola Gobbo, Luc Seguin, and Sarah Padilla have been honoured for their service in the field.

This year, Paola Gobbo has been presented the Outstanding Achievement award based on the totality of her service as an intelligence analyst, recognizing her outstanding performance and continued commitment to excellence.

Paola’s achievements and steadfast commitment to her craft as an RCMP intelligence analyst are exceptional. Her contributions are such that they have greatly influenced and enriched the intelligence and policing community over a sustained period, said Ms. Jorda Metcalfe, Director of the BC RCMP Criminal Analysis Program.

Sarah Padilla is the recipient of the Excellence in Leadership & Mentoring Award in recognition for her years of demonstrated leadership and deep regard for her colleagues within the BC RCMP Criminal Analysis Program.

Luc Seguin has also been awarded a highly commended certificate in recognition for taking on a lead role as an acting supervisor while still providing investigational support, and demonstrating exceptional leadership & mentorship skills.

BC RCMP Federal Policing Border Integrity Program contributes to the national security of Canada and protects Canadians from terrorism, organized crime and other border-related criminality, and RCMP Criminal and Intelligence analysts are an essential part of the RCMP’s long and proud history of keeping watch over Canada’s borders. 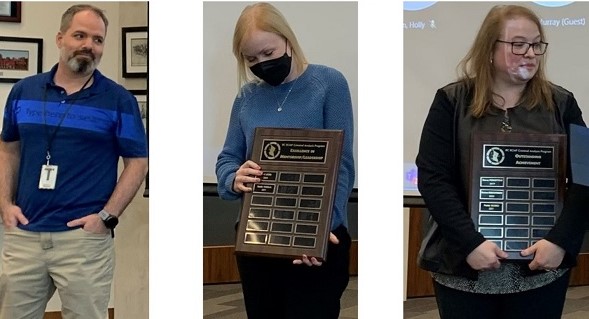