Being the new guy 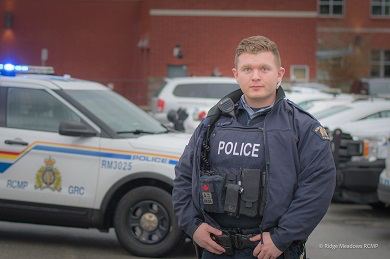 It’s my second night shift, of my first week on the job, and I’m about to make my very first actual arrest.

In this particular incident, several police officers were on scene as we had to coax a child away from an intoxicated and angry man. Seconds after the child was safe I went to arrest the individual who, in this moment, decided that he was not interested in going to jail for the evening. It took four of us to facilitate a safe arrest and in that struggle, my training kicked in. Now later, it has reminded me just how valuable my six months at the RCMP’s Depot training division had been.

In full disclosure, I grew up in an RCMP family so I admittedly felt immense pride knowing I was about to enter Depot, the training academy where all members of the RCMP undergo a six-month program to prepare them for their policing careers. I won’t sugar coat anything; training was hard. However, every second was worth it the moment my father, a retired RCMP officer, presented me with my badge. It was a moment made especially meaningful as my father had nearly died in my arms three weeks prior to my leaving for training due to a medical issue. Thankfully, he’s doing great now.

Just three days after my graduation, I took my post as a Constable at the Ridge Meadows RCMP. I felt like the new kid at school.

On my very first shift I got to meet my peers and fellow officers of A Watch and I received an introduction to the internal workings of the detachment. For the first two months of my career, I was to be mentored by my training officer. He would oversee my development as a police officer and ensure I didn’t mess anything up too badly as I went through the growing pains of learning the job. He would also often encourage me to grow a moustache as a running joke amongst police is that a rookie hasn’t yet had time to grow out his stache. Sadly, this is one task I feel I will underperform on.

In training, an arrest usually goes smoothly. You give your actor suspect some commands, they comply, you go through some motions and end up with the person in handcuffs. The reality is, arrests can be difficult, especially when substance abuse is a factor and the individual may not be acting in a coherent or reasonable manner. I am quickly discovering that this career is very much trial by fire and not every citizen I encounter is going to behave according to what I read in my text books.

For example, one of the highest risk situations for a police officer is a 10-11, a traffic stop. The first traffic stop I attempted involved the vehicle driving off at a high rate of speed down the wrong side of the road, in an attempt, I suspect, to evade me (we ultimately identified the registered owner and ticketed them).

One of the more serious files I have attended thus far in my career, was an arson that originally was called in as a domestic dispute. I’ll never forget the moment in the car on the way to the scene when the radio clicked on in my ear piece and we were informed, the house is now on fire. That day saw a major response from the RCMP and Maple Ridge Fire Department, including the utilization of Air 1 and the Integrated Police Dog Service (IPDS) to locate the suspect.

Ridge Meadows has been a wonderful community to work in. Some positive changes I have had to make to my uniform include, now keeping a supply of stickers for all the kids I come across in my duties. And, just a few days ago I ran across a family from Russia who recently immigrated to Canada. Coincidentally, I have an interest in Russian culture and I had also learned some Russian words and phrases from a troop mate at Depot. I understand enough Russian that the father and I had a brief conversation and he told me his son wants to be a police officer and asked if I would take a photograph with him, which I gladly did.

Moments like this remind me that the RCMP is such an integral part of Canadian history and identity and it makes me proud to be able to propel that image with positive encounters with our community.

As I approach six months of service and am now solo in my own police car, I recognize I still have a lot to learn. But the members of the Ridge Meadows RCMP are the best examples, and I feel more confident in myself and my abilities every day. I’m hopeful to serve our community with compassion and distinction for many years to come and I thank the citizens of our communities in trusting me to help keep them safe.

Click here to learn more about the "Profiles" series.