The Kelowna RCMP is investigating a robbery of a gas station on Springfield Road.

On November 15, 2021 at 1:08 a.m., two male suspects entered a gas station on Springfield Road. One of the suspect’s threatened the employee with a pipe and robbed the store of cash and cigarettes while the other suspect stood watch of the door.

Suspect one is described as a Caucasian man, large build, wearing a grey sweater, dark pants, and brown shoes and dark mask. 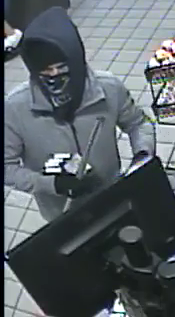 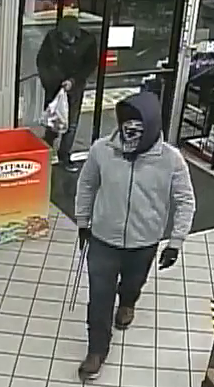 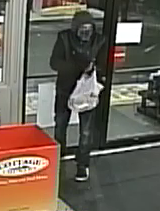 The suspects fled the store on foot toward Cooper Road with an undisclosed amount of cash and merchandise.

Thankfully no one was injured during this robbery, said Cpl. Tammy Lobb. Investigators are interested in speaking with anyone who may captured the suspects fleeing the area on their dash-cams.

The investigation is ongoing and is being led by the Kelowna RCMP General Investigative Services - Robbery Unit. Anyone with any information on or who may have witnessed this incident is asked to contact the Robbery Unit at 250-762-3300 or remain completely anonymous by calling Crime Stoppers at 1-800-222-8477 or by leaving a tip online at www.crimestoppers.net