My week at the fires – by Constable Julie Klaussner

Ridge Meadows, BC Wildfires, This Is Who We Are 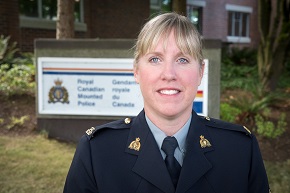 I’ve actually been awake for a couple of hours but night shift messes with your internal clock. As I lay here, I think back to how early this year’s fire season started and how I suspected there was a high likelihood that we would be called to action. The time away from my family makes it a difficult personal experience but it’s also very rewarding at the same time.

I know we are needed.

We never know where we are going to be sent until the day of deployment. I arrived at the Pacific Regional Training Centre in Chilliwack, B.C., and am told I am deployed to the Whiterock Lake fire in the Vernon, B.C., area. I’m thankful that I get to drive up in a truck and miss out on the bus ride. I also ended up being in a vehicle and got to catch up with a troop-mate who I hadn’t seen since I left Depot training 12 years earlier.

I arrived in Vernon and checked into my accommodations which would be my home for the next 8 days of deployment, only to be faced with the dreaded nightshift. This isn’t a whine (ok…maybe just a little) but for a police officer who hasn’t been on nights for 9 years this is tough for several reasons. One, my body isn’t used to it and two, you try to stay connected with family at home who, for them, it’s a big deal that mom’s gone away for a week because they forget that she’s a ‘cop’. I am reminded how fortunate I am to have a day position within the force and I think of my general duty brothers and sisters, across the country, who regularly work the zombie hours. Thank you to all who do it regularly. I appreciate you.

Our first night was spent serving evacuation orders. This was difficult.

Not difficult for me but for the citizens we were there to serve. My particular area had already been served three times only to be told that they could go back to their homes several times due to changes in the fires. The fires will do that to a community.  Toy with your emotions. I felt so empathetic for these people. I think of the little B.C. Town of Lytton who, just weeks earlier, was literally burned off the map.

On other nights we drove throughout the community. Country backroads...just us, the deer, fox and bears, also trying to stay safe from the fires. And rural winding roads where emergency services would take longer to reach. Probably much longer than where you and I live. 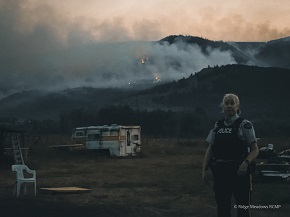 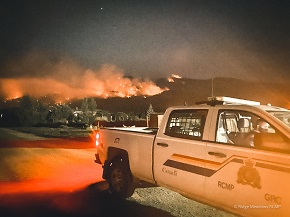 We would drive all night looking for spot fires but we were also patrolling to protect people’s property, not only from fire, but from a high likelihood of potential looters. Criminals can be such jerks and look for any opportunity. It makes me mad.

Every morning, at the end of my shift, I would fall into bed, the nasty hangover of smoke in my nose and hair. As I lay down to rest I can’t help but reflect on one moment in the day.

Earlier this evening I was approached by a woman when I went out to start my shift. She was so concerned that I was living at the hotel thinking I had been displaced by the fire. She herself had been evacuated for a month already. When I told her I was here to help out with the fires she was so appreciative and thanked me for my service. Here is a person, who’s life had been significantly impacted by this situation….and she’s worried about me?!

They say, it takes a village, and I have a pretty awesome husband who always supports anything that I want to do in my career, thus supporting me on my second deployment of the summer and generally just making things work. I had, at the end of a tough week, a house to go home to which a lot of people up there didn’t have the luxury of.

A huge thank you to the North Westside Fire Rescue for opening up their hall to us so that we could have a place to rest and use a washroom and to the many citizens who dropped off home cooked meals, cookies and drinks. In total Ridge Meadows RCMP have sent 22 members for deployment throughout the fire season. I can’t imagine the toll this has taken on the force provincially and federally.

This is what police and fire do every fire season. Because we all want to help people.

I know we are needed.