Police enforcement of the BC Supreme Court injunction order in the Fairy Creek Watershed area continued yesterday on September 12, and today on September 13, 2021, with ongoing efforts to keep the Granite Mainline Forest Service Road and other corridors free from any obstructions, devices and open for industry access.

There were no arrests yesterday on Sunday, September 12. However, today on September 13, 3 individuals were arrested for breaching the injunction (contempt of court). All were processed and released after signing release conditions. 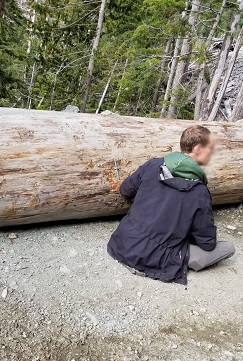 Larger image: closer image of individual’s arm in a tree stump with nails

Since enforcement began, the RCMP have arrested 992 individuals; 110 of whom were previously arrested with a combined total of 261 times. Of the total arrested, 771 were for breaching the injunction (contempt of court), 188 were for obstruction, 16 were for mischief, 6 were for breaching their release conditions, 6 were for assaulting a police officer, 2 were for failing to comply with a court order, 1 for counselling to resist arrest, 1 for causing a disturbance, and 1 Immigration Act.