It is a community event that has been years in the making, but yesterday a new Haida Totem Pole was raised at the Daajing Giids (Queen Charlotte) RCMP Detachment.

The event, which was presented by the Skidegate Band Council and the BC RCMP Indigenous Policing Services, showcased the spirit of reconciliation between the RCMP and local indigenous community. The detachment also raised the Council Of Haida Nations flag for the first time at the ceremony where it will permanently fly in front of the detachment. 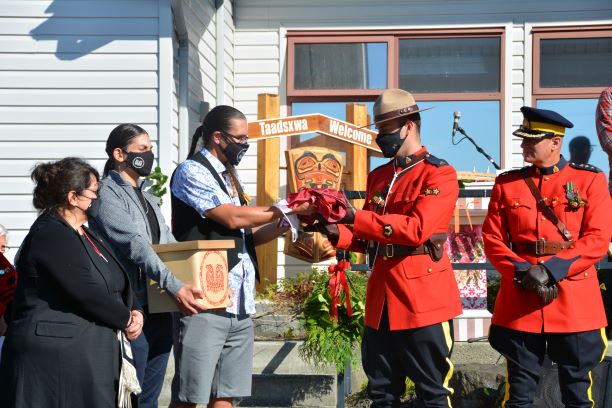 The flag symbolizes two things, the first being the detachment is built on Haida traditional territory and the second is it represents the people who we serve, explains Sgt. Greg Willcocks, Daajing Giids (Queen Charlotte) RCMP Detachment Commander.

This was an important event for the Detachment and the communities that we serve, adds Sgt. Willcocks, It definitely couldn’t have happened without the support of the Haida Hereditary Chief leadership, Skidegate Band Council and the Council of Haida Nation. Their support was instrumental in finally raising the totem pole.

Originally designed by Billy Yovanovich Jr through a contest which occurred 10-years-ago by the Queen Charlotte detachment, the totem was later carved by Haida master carver Garner Moody. The 10-foot-tall totem pole features a traditional Haida Watchman which are the protectors of the community and land; a copper shield; pink fingers nails representing the LGBTQ2+ community; and the watchmen wearing a Stetson hat to symbolize the RCMP. 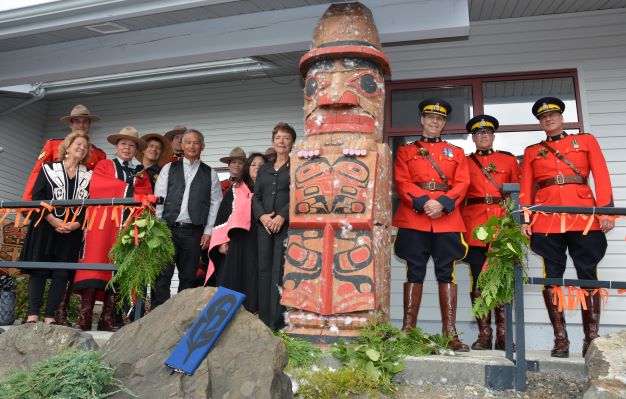 Sgt. Willcocks says while the totem raising has been a local community-led initiative he is hopeful that other communities will look to identify local reconciliation opportunities that reflect their unique local traditions and heritage.