B.C. Southeast District, This Is What We Do 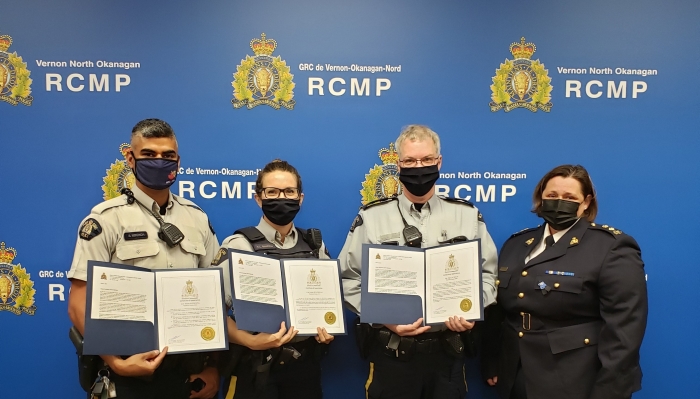 In the days to come, frontline RCMP officers from all across the BC southern interior are being formally recognized by their detachment commanders on behalf of the District Commander for the RCMP Southeast District. Those men and women will be acknowledged for their exceptional efforts to both save and attempt to save countless lives with the administration of Naloxone since 2016.

In the fall of 2016 RCMP began to carry nasal Naloxone for two specific reasons – officer safety, in the event that an employee, or police officer was inadvertently exposed to Fentanyl or an analog and to save the life of any person who was suffering an opiate overdose. Fortunately, there have only been a few instances of Naloxone being administered to RCMP employees and front line officers, but since October 2016 until the end of March 2021, the RCMP has administered nasal Naloxone over 1,000 times across Canada to individuals suffering an apparent or suspected overdose.

In the BC RCMP’s Southeast District alone, upwards of 271 doses of nasal Naloxone has been administered by front line police officers during the course of their duties in 195 of those over 1,000 events since October 2016. In the view of their District Commander, each of those police officers have gone above and beyond in a clear effort to save people’s lives. In the vast majority of those situations, that’s exactly what they did. Although police officers weren’t in a position to save each and every life, it did not make the attempt to do so any less valiant.

C/Supt. Brad Haugli, District Commander for the RCMP Southeast District, who took the opportunity to formally recognize those who have administered nasal Naloxone while on the job said, Naloxone is extremely important in all communities, but it is of particular value for RCMP in smaller communities where immediate emergency medical response is not always available. We have seen success with Naloxone in all the communities we serve here in the Southeast District, and will continue to take every effort to reduce deaths attributed to the Opioid Crisis in BC.

Each police officer was presented, while surrounded by their peers, with a District Commander Certificate of Appreciation along with a letter of thanks. At least one dozen police officers will be recognized three or more times for their life saving efforts on separate occasions, with Sgt. Greg Woodcox of the Kelowna RCMP Community Safety Unit being recognized the most at an astounding seven times.

C/Supt. Haugli also recognized Supt. Shawna Baher, the Officer-In-Charge of Vernon North Okanagan RCMP, for her leadership and dedication to the implementation of the nasal Naloxone rollout and formal employee recognition program. Supt. Baher was one of the forward thinking leaders in the RCMP who worked collectively with various national key stakeholders, which led to this being a reality. Shawna’s leadership continues to make a positive difference in our communities, not only here in the Southeast District, but throughout BC and across Canada.