Corporal Rebecca Munro – “We are strong”

B.C., Indigenous Policing Services, This Is Who We Are

Cpl. Munro grew up in Lytton and is a member of the Nlaka’pamux Nation. The Nlaka’pamux are an Indigenous First Nations people of the Interior Salish language group in southern British Columbia. Their language is called Nlaka’pamuxcheen and the word Camchin or Kumsheen means meeting of the great rivers. 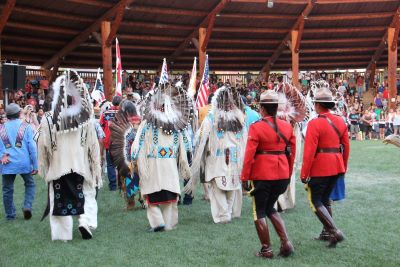 There were lasting traumas that Cpl. Munro will never be able to comprehend that affected her loved ones as a result of their residential school experiences. The residential school in the community of Lytton was called St. George’s. My grandma would talk about always feeling hungry in residential school. Which was very hard because she knew her family was so close. From the school, my grandma could see the smoke from her family’s home. Her family was so close but she couldn’t see them. And because males and females were separated she couldn’t be with her siblings.

When her grandpa left the residential school, he said he knew he had to do better because didn’t want any of his family to go to residential school. As a result, he didn’t teach his children their Nlaka’pamuxcheen language. Our language got cut off with that generation because my grandpa had stories about getting strapped when he used his own language, and it broke our connection with our culture. However, Cpl. Munro has recently grasped the opportunity to learn the language from her elders. During the pandemic, her uncle and two aunts started teaching the language virtually. I want to be a part of this revitalization of my family’s culture through language because it is such a huge part of who we are. We are regaining a piece of ourselves that was lost during residential school.

As a result of her family’s personal experiences, Cpl. Munro is able to recognize how years and years of pain still affect people today. Residential schools affected people in so many ways. The loss of knowing how to love and be loved. When you’re taken out of your home, you lose the compassion and the care that every child deserves. It was broken. Going back to those abuses and trauma, Indigenous people rely on substances. In policing you can see the hurt, and the misuse of drugs and alcohol, in order to cope with the pain.

Fishing is the lifeblood of the Nlaka’pamux Nation. We have our inherent rights, that’s part of us. Lytton is an example of utilizing what we have there. Two of the major rivers in BC flow through there. The Fraser and the Thompson. The confluence of where they meet, in the Nlaka’pamuxcheen language it means ‘where the great rivers meet’. ‘Camchin or Kumsheen’ was also the original name of Lytton. Language and place names play a vital role in our culture to say we’ve been here for a long time. Knowing we have the river and the life those rivers bring my people is huge to our culture. 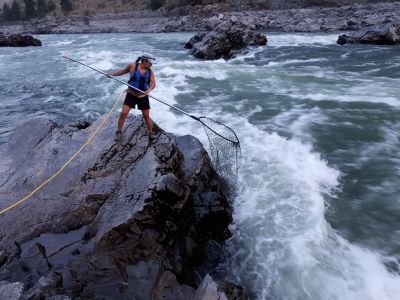 Fishing is an important part of her Indigenous background and connects her to her people. Through fishing Cpl. Munro has strengthened her relationship with her father. My dad didn’t play a big part in my life while I was growing up because of hardships. But we have built and strengthened a relationship by going fishing to provide for our family. Fishing has brought me closer to my dad.

Initially, Cpl. Munro wanted a career in teaching. She thought that if she became a teacher she could help give kids a better future but realized that a career in policing could do the same. One of the driving factors that led her to apply to the RCMP was that she had family in the application process and had seen Indigenous police officers come through the community when she connected with the Indigenous Recruiter. I was inspired by my cousin’s desire to help people and seeing that there were Indigenous people in the force already. 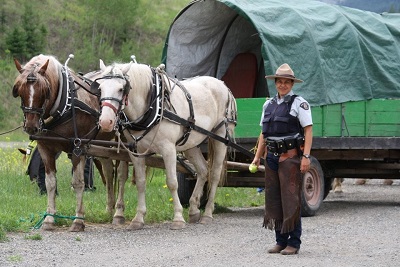 Her family was proud when she became a Mountie. Her grandpa always pointed out that she was the role model for the children in the family. The first time my grandpa saw me in red serge was in Kamloops for a pow wow. This was a hugely powerful moment because he always wanted me to be the best I could be because he said so many children were looking up to me.

Cpl. Munro was first posted in posted to Alexis Creek in First Nations Policing. She wanted to be in a First Nations role to be a liaison to the community. After which she transferred to the Tk’emlúps Rural detachment. She loved working in Indigenous communities as a liaison and the opportunities she had to immerse herself in the cultures and experiences it afforded her.

Community is family. The theme of family is central to who Cpl. Munro is as a person and as a police officer. Being welcomed in the communities was so important to me. Family is my entire community. Everyone is an aunty or uncle. There is no distinction. Family is just very community based and no labels.

After Kamloops, Cpl. Munro moved to the lower mainland. She was a Missing Person Liaison for nearly 2 years prior to being promoted to the corporal position as the Indigenous Recruiter in Indigenous Policing Services (IPS). She views her current role as coming full circle. I was recruited by the IPS recruiter. I know the RCMP values Indigenous people and wants more people to join the Mounties. We want more people who want to make that difference in their community. I had great, phenomenal support. In this career I’ve done things in life I never thought I could. A career in the RCMP has changed my life and my family’s life.

Cpl. Munro’s Indigenous Recruiter and mentor is Inspector Dee Stewart, the Officer in Charge of IPS. I am Shuswap and was raised on Bonaparte First Nation (St’uxwte’ws) and our nation is a neighbor to Cpl. Munro’s community. I was also the RCMP’s Indigenous recruiter for 8 years and was able to work with our communities and individual applicants who aspired to be RCMP members. To have Indigenous people that want to become RCMP members and work within our communities gives me an overwhelming sense of pride. Cpl. Munro is one of the recruits that worked hard and seen herself working with our communities. Now she strives to help others reach those goals.

Cpl. Munro’s message to young Indigenous youth is that We are strong. Do anything you put your mind to. Become educated and use your voice because for so many years we weren’t able to use our voice.