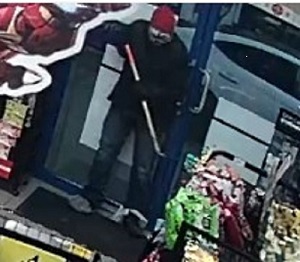 RCMP arrested one person and are asking the public’s assistance to identify a second person in a photograph taken from a security camera as police investigate a pair of armed robberies.

Shortly after 2 a.m., on April 27, 2021 the Chilliwack RCMP responded to a report of an armed robbery that occurred at a convenience store in the 45000-block of 1st Avenue. Investigators on scene determined a man allegedly armed with a knife entered the store, demanded money from the till, and then ran away after receiving a small amount of cash. Investigators immediately broadcasted the suspect’s description to patrolling officers however; police did not locate the person.

Police responded to a second report of an armed robbery at the same store just after mid-night on April 29, 2021, when two men allegedly armed with a knife ran off with a small amount of cash. Officers reinforced by the Lower Mainland District Integrated Police Dog Service (IPDS) quickly cordoned off the area where police located and arrested a 29-year-old-man from Chilliwack but did not locate the second suspect.

William Christofer Cowdery is charged robbery and disguise with intent to commit offence. Mr Cowdery remains in custody pending a court date in May 2021.

As RCMP continue our investigation we are reaching out to the public for assistance to identify the second suspect associated to the robbery reported to police on April 29th, says Corporal Mike Rail spokesperson for the UFVRD.