The French government awarded Chief Superintendent Maureen Levy, Lower Mainland District RCMP and Assistant District Commander with the French National Defense Medal – Bronze, for her work as a peacekeeper in Iraq in 2018.

The French medal was awarded to her by the Vancouver French Consul General Philippe Sutter, at a special ceremony held today at British Columbia RCMP Headquarters at Green Timbers, Surrey. 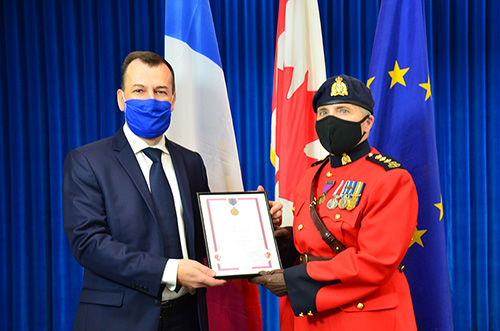 Chief Superintendent Levy was deployed to Iraq as part of the Combined Joint Task Force Iraq – Operation Inherent Resolve. This was an international Coalition that was comprised of seventy-four member states and five international partners with the goal to defeat Daesh.

The French National Defense Medal is awarded to someone who has rendered honourable services particularly important to the defence of France. It was created in 1982 by a French Defense Minister.

While in Iraq, Chief Superintendent Levy served as the Chief Gender Advisor for the Coalition under the command of the French General of J9, General Staff of the Operation Inherent Resolve in Iraq.

A strong commitment for the general interest led her to outstanding results in favour of the coalition, especially in regard to awareness and inclusion of respect as to gender equality within Iraqi police and land army training, said Consul General Philippe Sutter during today’s ceremony.

More can be found about C/Supt Levy's career.

C/Supt. Levy said that her deployment to Iraq was the pinnacle of her career to date and that she was fortunate and privileged to work alongside the French Coalition military and other Coalition military personnel with the goal to defeat Daesh. Knitting communities back together, whether in Canada, Iraq or other parts of the world with the view to help create safe and secure communities requires an inclusive approach. French General Jean-Marc Vigilant played a vital and integral role in this regard as he was truly a champion for inclusivity and diversity during our tour in Iraq and it was indeed a privilege and honor to work alongside him.

I am honoured and humbled to receive this medal from Vancouver French Consul General Philippe Sutter and I want to thank the RCMP and the Government of Canada for enabling me to lend a hand to a fragile country that needed our help, says C/Supt. Levy.

For over 30 years, Canadian police have deployed to some of the world's most fragile and conflict-affected areas. More than 4000 Canadian police officers have served on over 66 peace operations since the program began in 1989.