It was smashing, thrashing, and trying to evade police, but in the end, a deer was safely apprehended by the Kamloops RCMP after it broke into a house. 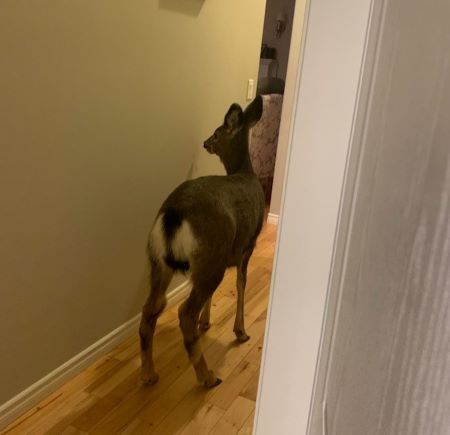 Click to view larger image: a small deer walks through a residential hallway

On Saturday January 23, Kamloops RCMP frontline officers responded to a report of a deer inside a residence on the 900-block of Pine Springs Road. The deer had entered through a small dog door and was jumping at the fireplace and window, trying to escape. A TV and some other items were damaged during its attempts.

Wild life inside a house can be extremely destructive, said Constable Crystal Evelyn, Media Relations Officer for the Kamloops RCMP. In this case, police were able to safely help the deer out, preventing any further harm from occurring to the animal or the house.

Officers used a blanket to cover the deer’s head, then held it down, placed a rug underneath it, and slid the deer out of the house. The deer appeared uninjured, other than receiving a minor cut to its mouth when it entered the house through the dog door.