Revelstoke, This Is What We Do 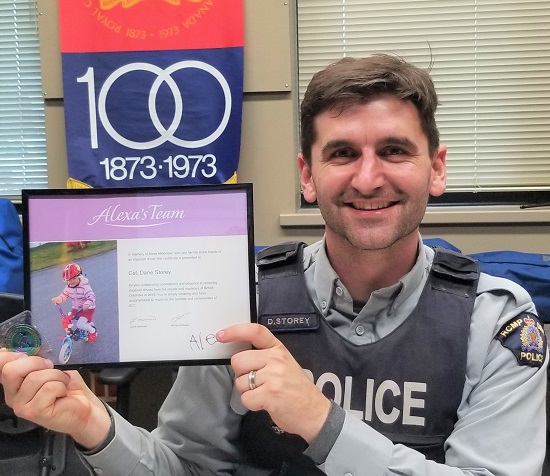 A local front line RCMP officer was recognized as an Alexa’s Team member, and celebrated by his peers for his outstanding work in improving road safety in the Columbia-Shuswap.

This past Monday, Cst. Dane Storey of the Revelstoke RCMP, was formally awarded an Alexa’s Team award for his outstanding efforts of removing 59 impaired drivers from British Columbia roadways and highways in 2019. A total which meant he joined the All Star Team.

Alexa’s Team pays tribute to the dedicated RCMP and municipal police officers who make an extraordinary contribution to reducing the number of drivers affected by alcohol or drugs on British Columbia’s roads and highways. The provincial recognition program is named in honour of four-year-old Alexa Middelaer, who was killed by an impaired driver in Delta, British Columbia in 2008.

Cst. Storey was presented with his letter from the Middelaer family, a plaque and a RCMP Traffic Services challenge coin in the Revelstoke Detachment, states Sgt. Chris Dodds, acting Detachment Commander for the Revelstoke RCMP. What’s even more astonishing is that Dane has already surpassed his 2019 total, with 62 impaired driving investigations conducted year to date in 2020.

Cst. Storey clearly leads by example with his attention and dedication in both identifying and removing impaired drivers from our roadways, in turn protecting all of us and our families as a result. Furthermore, Dane has demonstrated to everyone that impaired driving is always prevalent on our roadways, no matter the vehicle volume, day or time, adds Sgt. Dodds.