The Alexa’s Team program recognizes dedicated police officers across British Columbia who diligently work to reduce the number of drivers affected by alcohol or drugs on BC’s roads. The team is named for Alexa Middelaer who was killed by an impaired driver in 2008, while feeding a horse with her aunt in Delta, B.C.

Since its inception, Alexa’s Team has grown from 26 to over 2,900 new and returning Alexa’s Team members from the RCMP and Municipal Police Agencies from all regions of the province. Since 2008, an estimated 102,841 impaired drivers have been removed from BC’s roads for alcohol and drug related driving offences.

To be considered for Alexa’s Team, an officer must remove a minimum of 12 drivers from the road by way of a 24 hour prohibition, Immediate Roadside Prohibition, Administrative Driving Prohibition, Drug Recognition Evaluation or Criminal Code investigation in one year.

Motivations for removing impaired drivers from our roads are different for every Alexa’s Team officer. Cst. Christina Klein from the Integrated Road Safety Unit in Nanaimo stated, I lost 2 grandparents in separate impaired driving collisions. I don't want another kid to grow up not knowing their grandparents because of a preventable collision. I don't want any more parents to go through the suffering of losing a child. This is a team effort that includes education and enforcement. I am honoured to be able to do this work in honour of my grandparents and Alexa. 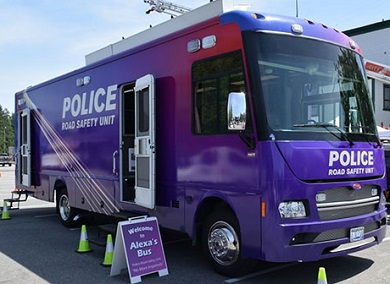 In lieu of the traditional Alexa’s Team recognition events, this year’s awards presentations will be held in house at the Unit/Detachment/Agency level, avoiding large gatherings and respecting BC Covid-19 health guidelines. Alexa’s family thanked Alexa’s Team members via a video presentation. Police chiefs and/or delegates, partners and colleagues thank Alexa’s Team members for their tireless work fighting impaired driving across BC.