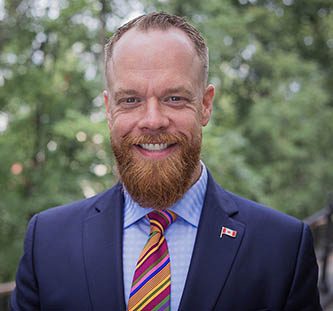 Interacting within the immense diversity of our communities is a reality of policing. It is vitally important that police officers recognize and understand the issues facing the various groups within our communities. At best, the relationship between one such group, the LGBTQ2S+ community, and law enforcement has been strained.

One BC RCMP officer is trying to change that perception by strengthening the relationship between LGBTQ2S+ community and the police.

Corporal Brendan Harkness has spent the last two years working on a campaign designed to highlight and promote acceptance, diversity and inclusiveness of the RCMP both within and without.

Two things have guided Cpl. Harkness throughout his career as a Mountie. The first was to be a competent, operational police officer. Since the start of his career in 2008, Brendan chose to work in urban, remote, and international locations to exhibit his ability to be sound officer.

The second motivation was to bridge the gap between the LGBTQ2S+ community and the RCMP. Wherever he was posted, Harkness did community outreach including speaking at the second World LGBTQ Conference for Criminal Justice Professionals last year.

He wanted a simple way to demonstrate that the RCMP is as inclusive and diverse as the communities it serves. He believes that it would be profoundly meaningful to employees, as well as the community, if every detachment were to prominently display a Pride Rainbow sticker. He called the campaign, Project Rainbow. It will be launched on October 15 in celebration of LGBT History Month.

If I had seen a rainbow in the front window of a detachment, it may have muted my concerns of becoming a police officer and the struggle I had deciding if I wanted to be a Mountie, say Brendan.

We can be approached without judgement

You can feel safe speaking to us.

This is a show of support for diversity and inclusion.

We seek to create a positive and safe space for everyone.

We embrace the diversity of the population.

We are Canada's national police: serving with pride.

At 19, Harkness wondered if he, as a gay man, could even become a police officer. He worried about potential stigma within the RCMP.

His father, himself a Mountie, discussed discrimination with him and they talked about strategizes to counter it and overcome it.

Police officers are more interested in how you do your job than who you spend your evenings with at the end of the night, says Brendan. That’s why I focussed on being an effective police officer from the moment I joined the Force.

This turned out to be an important tool in overcoming any obstacle. His focus was on doing the best job as an operational officer.

Being a well-regarded, competent police officer has given me a voice within the organization because I have credibility amongst my peers, says Brendan.

He knew if he demonstrated that he was a consummate, professional cop first, his orientation wouldn’t change that.

Harkness started writing the business case for Project Rainbow two years ago when he was the Detachment Commander of Hudson Hope.

He saw this initiative as something that had a dual meaning. It would visibly demonstrate the RCMP’s commitment to ensuring that individuals from all communities are welcome. It would also show employees that we have a respectful and inclusive work environment.

The public may not see how diverse we actually are as an organization, says Brendan. My experience has been very positive.

Perhaps because of the challenges in the past, the endorsement of this project reflects how much the RCMP has evolved.

BC RCMP recognized the timeliness of this initiative. It’s a time when we need to be more overtly responsive to our community and to Canadians, says Deputy Commissioner Jennifer Strachan, Commanding Officer of BC RCMP. This visually demonstrates who we are.

The fact is, we are inclusive, says Harkness. Project Rainbow is a way to demonstrate that to the public, and to our employees, that we are inclusive and everyone is welcomed.

My job is policing, that’s what I joined this organization to do, and by showing up visibly as an openly out LGBTQ member has shown my integrity in my job and in me wanting to show up for the people I work with, he added.

Today, Harkness is in the Ukraine on a European Union Advisory Mission as a Strategic Advisor, developing and delivering training to their National Police. He may not be here to see the first sticker go onto the front door window of a detachment, but he knows that Project Rainbow is about creating a permanent, consistent symbol of diversity and inclusiveness, and sending a message of hope.

Read Article - Letting the Light In