For Katherine Hansen, joining the RCMP Musical Ride in 1996 was a dream come true. As a little girl growing up on a farm in Penticton, Katherine was horse-crazy. But it was when she saw the Musical Ride at age six, that her future path became crystal clear.

From that moment on, I had a vision to become a Mountie and ride in the Musical Ride, says Katherine. I had a little red cape and rode my black horse pretending that I was a Mountie.

Katherine joined the RCMP in 1992 and her first post was in Saskatchewan where she stayed for four years. In 1996, she had the opportunity to make that childhood dream became a reality and join the Musical Ride.

The Musical Ride has its roots from the very beginning of the RCMP. In 1873, the North-West Mounted Police, as they were known then, relied on skilled riders to carry out police duties across the West. Members of the Force commonly competed amongst themselves and performed tricks on horseback. It soon lead to them performing at events.

Today, the RCMP Musical Ride is consists of a full troop of 32 riders and their horses, performing intricate figures and drills choreographed to music. These movements demand the utmost control, timing and coordination. The riders act as ambassadors of goodwill who promote the RCMP's image throughout Canada and all over the world.

Children absolutely love the Musical Ride, says Katherine. People are so moved by the performance, that they always asked if there was something they could take away as a souvenir.

They used to hand out little cards with a picture of the Horse and Rider, but Katherine thought it would be wonderful if they could give a book about the Musical Ride to children.

Katherine traveled across Canada and Europe performing with the Musical Ride. She left in 2000 and was transferred to Newfoundland before being posted in BC in Princeton, Kelowna, Richmond and finally at BC RCMP Headquarters in Surrey.

After 25 years in the Force, Katherine retired in 2016. But not for long. She returned as a Reserve Constable in her home town of Penticton. Throughout her career, she never forgot the stories about the Musical Ride Horse. When her daughter was young, Katherine used to tell these stories to her at bedtime.

Earlier this year, Katherine was thrilled to be asked to rejoin the Musical Ride as an experienced rider. Her bags were packed and she we ready to go. Then COVID-19 hit and like many, her plans were dashed.

Then she thought that maybe this was the time to sit down and write these stories.

I always wanted to write for children because I knew there were other kids like me who dreamed of one day being with the Musical Ride, says Katherine. I wanted to write stories about believing in yourself, the power of friendship, and working with a team. Maybe this is the perfect time to write these uplifting stories.

Harry the Musical Ride Horse is the first of three books Katherine wrote while grounded by COVID-19 in her home. The RCMP Foundation agreed to distribute these stories through the Mountie Shop.

For every 100 books that she sells, she will donate 10 books to local charities, to assist with children and their families. The first 10 books are going to the RCMP Victim Services unit in Penticton.

Harry is an unusual horse. Katherine chose to write about Harry because he was the only horse in the Musical Ride who had wavy mane and tail. It is a Canadian breed of horse and the curly mane is a distinction of the breed. Harry stood out to the children because he was so different. But as the story goes, Harry didn’t want to stand out in a crowd. The story is about appreciating and embracing our differences.

Everything just fell into place so effortlessly that it just reinforced to Katherine that this was the right time to write these stories. It was meant to be.

The artist who illustrated the book was one of her colleagues who rode with her on the Musical Ride. Katherine remembered Trish Lafrance as being a phenomenal artist so she asked her if she would illustrate the book. Trish said she would love to.

The cover art is by a Vancouver Island artist named, Joan Larson. Joan had painted an entire series of beautiful paintings featuring the RCMP Musical Ride. Katherine asked Joan if she could use one of her photos on the cover. Joan instantly gave her blessing. Katherine selected the painting for the cover because she thought that it captured the magic and everything that is special about the Musical Ride. Also, this horse was the very first horse Katherine rode in the Musical Ride, named Indigo.

It is my intention to write a story about Harry for every Province and Territory across Canada, says Katherine. So when children ask if they have a souvenir about the Musical Ride, they will get as story that takes place where they live.

The proudest moments of my life were riding across the country and the world promoting Canada and the RCMP, says Katherine. Many times when they played the Canadian Anthem at the beginning of the performance, it was such a powerful moment and I, too, would start crying. There is just something magical about the Musical Ride. Something so Canadian. 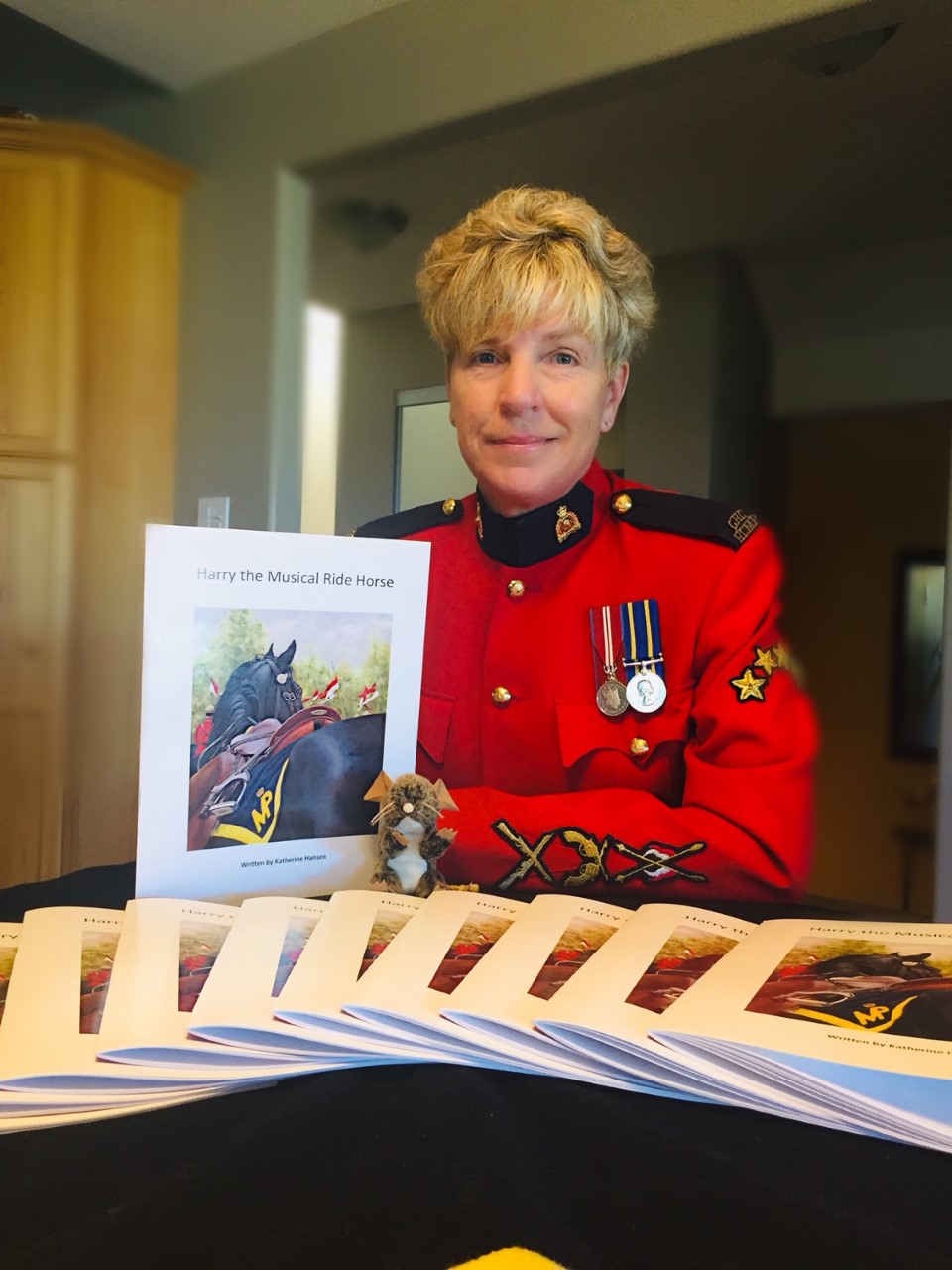