BC RCMP announce update in the ongoing northern BC homicide investigations 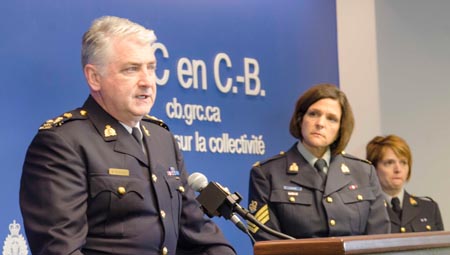 Good afternoon, and thank you for coming here this afternoon for this update into the status of the three homicides in Northern British Columbia.

I would like to begin by reiterating, that given the information announced earlier by our RCMP colleagues in Manitoba that the search for the suspects in the three Northern British Columbia homicides has resulted in a discovery this morning.

At approximately 10:00 am, RCMP officers located two male bodies, in the dense brush, within 1 kilometer from where the items linked to the suspects were found. This is approximately 8 km from where Mr DYCK’s burnt Rav 4 vehicle was located.

Manitoba RCMP has confirmed that the autopsies are being scheduled in Winnipeg to confirm their identities and to determine the cause of their deaths.

While we are still waiting for the definitive confirmation of the identities of the two deceased men, we believe that they are the individuals that we were searching for.

BC RCMP investigators have spoken to the families of Leonard Dyck, Lucas Fowler and Chynna Deese and provided them with the latest update. The RCMP will continue to offer support to them understanding that the traumatic losses they have gone through do not end with the deaths of these men whom we believe to be our suspects.

We will also continue to offer support to the Port Alberni families of the two men as they deal with these difficult developments.

Investigators in British Columbia have worked tirelessly since the initial deaths were first reported to us on Monday July 15th, but I would like to stress that our investigative efforts have not concluded. We still need to ensure that our investigative findings, whether it is statements, evidentiary time lines, physical or digital evidence continues to confirm our investigative theory and eliminates any other possibilities or suspects. Until that is completed, we will not conclude this file.

We continue to consult with the BC Prosecution Service with respect to next steps and are mindful that a positive confirmation that our suspects are deceased does impact the options moving forward.

I would like to acknowledge that this investigation has been one of the more, dynamic and unpredictable that the BC RCMP have recently undertaken.

This investigation, and the subsequent search efforts, have crossed multiple provinces and territories, and included extremely remote locations, and impacted communities and families both nationally and internationally.

I would like to thank our law enforcement partners across Canada, the United States and Australia for their support and assistance. In particular our colleagues with the RCMP in Manitoba who spearheaded the exhaustive and challenging search in that province. Their perseverance and dedication has resulted in today’s announcements.

Finally I would like to recognize our partners in the media, locally and internationally, who were instrumental in providing the latest updates from our investigators in a timely and comprehensive manner. The ongoing public engagement and media coverage was key to public awareness which resulted in police receiving a consistent stream of information and over 1000 tips.