Are You Really Talking to the Police?

There have been incidents where people impersonating the police tried to scam individuals and businesses. In some cases, criminals successfully used this ploy to commit robbery, child abduction, sexual assault, and kidnapping.

If you are suspicious about a person presenting themselves as a police officer call your local police immediately. Police dispatchers will be able to confirm the identity of any police officers working in the area.

Here are some examples

A male, who identified himself as a RCMP officer, telephoned the parents of a local resident and told them their son was in trouble with the police in Lebanon. The caller alleged their son (used the son's actual name) was going to be charged with two counts of Possession for the Purpose of Trafficking. The caller then asked to have $9000 wired to Lebanon through Western Union. The money would be used to process the criminal charges and have the son released from police custody.

A real police officer would not ask on behalf of your relative to have money transferred through Western Union. Do not send money before doing your own investigation.

In another case, an individual received a call advising them that their son had been a victim of identity theft. The "officer" was able to provide the date of birth and cell phone number of the supposed victim. The police impersonator then proceeded to ask for more information on the son. The recipient of the phone call was skeptical about who she was speaking with and contacted police when the phone numbers provided by the "officer" were not what they should have been.

A resident received an unsolicited brochure arriving by mail from a police association. The brochure asked for donations to the Cops for Kids Safety Program.

The RCMP does not engage in, endorse or conduct mail or telephone solicitation to raise funds for community policing programs. Like any request for donations, the public is encouraged to research the organization or charity thoroughly prior to making any donations.

A police impersonator with flashing lights pulled over a woman and asked her to step out of her car and hand over her identification.

Call 911 and ask dispatchers to verify the contact. Then tell the officer, through a cracked window and locked door, that you plan to cooperate, but you have heard about police impersonators and are concerned for your safety so you are verifying the contact through dispatch.

A man entered a business, introduced himself as a police officer with a badge, and asked to see the cash that the previous customer had paid with. He told the clerk "there was an investigation". Once the cash was handed over, the man gave the clerk a fake police file number and said he would return.

In another case, a man dressed as an RCMP officer entered a gas station and attempted to remove an ATM machine.

Persons announcing themselves as police officers asked for entrance into a home. In some cases, this illegal entry has resulted in theft, assaults and kidnapping.

Some tips to help prevent you from becoming a victim:

Here is a picture of an RCMP badge. 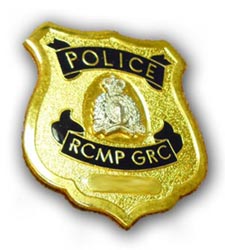