Investigation continues into a report of weapons and threats at a Chehalis Lake campsite which occurred during the late evening hours on May 23, 2021. Agassiz RCMP are releasing a photo obtained during the incident in the hopes that someone is able to identify the individuals involved or that additional witnesses may come forward.

Background: Shortly before midnight on Sunday, May 23, 2021, Agassiz RCMP received a report that individuals camping near Chehalis Lake had shot a pellet gun in the direction of a nearby campsite and then subsequently produced a machete, assaulted a female and demanded the family depart the area. The family subsequently fled in fear and reported the incident to police.

This is the second incident in which violence and threats have been reported in area campsites.

These criminal acts are not tolerated and the Agassiz RCMP continue their investigation into these matters in order to hold the people involved responsible, says Sgt, Mike Sargent, Detachment Commander of the Agassiz RCMP. Agassiz RCMP have stepped up patrols to these areas and the public can expect to see an increased police presence during the next few months so that everyone has the opportunity to safely enjoy their camping experience.

Police are hoping that the attached photograph of male suspects in the background at the campsite will assist in identifying the suspects to further their investigation. 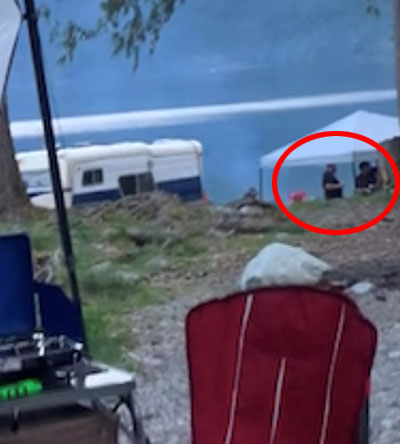 Police are asking for public assistance in identifying the individuals captured in the attached photo.