Slow Down And Move Over

The RCMP would like to remind the motoring public to Slow Down and Move Over when approaching official vehicles stopped on BC roads.

On January 1, 2015 the previous ‘Slow Down and Move Over’ law was amended to require motorists to Slow Down and Move Over, for ALL vehicles stopped alongside the road, which have flashing red, blue or yellow lights. This change under the Motor Vehicle Act provides maintenance workers, utility workers, land surveyors, animal control workers and garbage collectors with greater protection from accident and injury. These workers are now included in Slow Down, Move Over legislation in the BC Motor Vehicle Act, which also protects the operators of emergency and enforcement vehicles and tow trucks.

Drivers must decrease their speed when approaching a stopped emergency vehicle when it is on or beside a roadway and has its lights flashing. Further, if there are two lanes going in the same direction, drivers must move into the inside lane to pass, if it is safe to do so and a police officer has not directed them to do otherwise. This gives emergency workers as much space as possible to complete their duties.

On undivided highways, this applies to motorists approaching the parked vehicle from either direction. If the vehicle is stopped on the driver’s side of the road, and there is another lane going in the same direction, drivers must move into that lane, if it is safe to do so.

Where the speed limit is 80 km/h or higher, drivers must slow to 70 km/h, if they approach a vehicle stopped at the roadside with its lights flashing, Where the limit is below 80 km/h, drivers must reduce their speed to 40 km/h. (Hint: think of it as the 70/40 rule.) 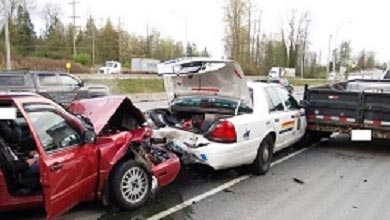 Over a ten year period, 235 roadside workers have been injured and 15 have been killed. Please remember: If you see red, blue or yellow flashing lights stopped on or beside a BC roadway- Slow Down and Move Over.

Andrew Britton – Paramedic Unit Chief – British Columbia Ambulance Service
As a 25 year paramedic I have responded to thousands of car crashes. Drivers are easily distracted by the events and do not look to where they are going of their speed. One day while preparing my equipment to extricate a patient a lady drove through the scene and had I looked up a second later I would have not been able to jump out of her path.

Cst. Krysti Seutter - Municipal Traffic Section - West Shore RCMP
I once parked my police vehicle with emergency lights activated in the fast lane to provide a safety pocket for myself to work at a collision scene on the Trans Canada Hwy, I heard several thumps. I looked up and realized that a passing vehicle had struck all of my traffic cones, narrowly missing my police vehicle. Luckily, I was on the edge of the grass median and not the passenger side of my police vehicle, or I would have been struck along with the traffic cones.

Paul Hurst – Fire Chief – View Royal Fire Rescue
Our #1 concern when attending Motor Vehicle accidents is making sure our firefighters and other emergency personnel aren’t hit, injured or killed by distracted and speeding drivers. 30 years can’t erase the image of attending to a fellow First Responder, an RCMP Officer killed in View Royal by a distracted driver while he investigated an earlier fatal accident. Seriously, slow down while driving through an accident scene and stay off your device, not paying attention injures and kills too many First Responders every year in North America. We want to get home at the end of our work day just like you.

Dave Lequesne – Owner and Operator - West Shore Towing
I have been in the towing industry since 1984, while growing up in the fire service. I've seen many near misses. I was involved in one accident when a driver hit the fire truck with lights on that I operating road side. I think I speak for all involved when I say " we're roadside helping your family, so please when you see an official vehicle, slow down and move over. We all want to go home to our families too.